The “I’m fine” statement and the thinking that supports it can encourage us to avoid the specific areas that need attention. Problems begin when we hide our truth and numb our pain. In the short-term this cover-up provides some relief, but the long-term effects of anesthetising what’s really going on can be harmful. Fear is often the reason for the masquerade — disguising problems prevents us from finding solutions. Concealing what is really going on and how we are truly feeling is damaging to our well-being.

Uncovering the truth is where fulfilment begins and it’s what True Believers do. Uncovering the truth is where the magical tipping points can be found. Life goes by so fast that we can sometimes forget who is in the driver’s seat. It’s important to press Pause, take our foot off the accelerator and check in to see what’s going on and, perhaps, update our planned trip.

It’s time to identify where you are now on the growth ladder. Here are the eight growth stages — where are you at now? 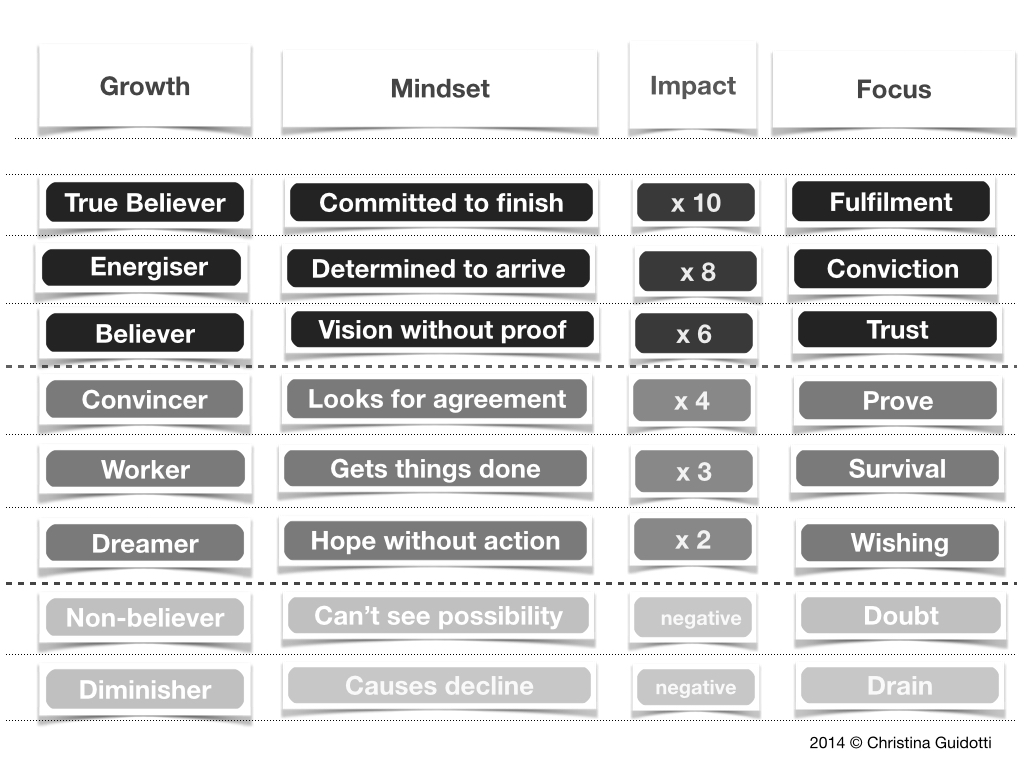 Each event in life has the possibility of sustaining or draining us. And although there are many factors that affect our well-being, a negative outlook and emotions are a good barometer of how we are going. When we are tired, sad, angry, guilty, fearful or worried, this is draining. A long period of being drained prevents us from being fulfilled and can cause decline and lead to serious problems in our health, relationships and work. Those who are affected by such a negative attitude are the diminishers. They cause decline within themselves and often in those around them by diminishing or lessening the value of the world surrounding them.

The non-believer is a pessimist. Self-doubt and negative thoughts hold non-believers back from finding fulfilment as they hesitate to see a better future. Distrust and lack of belief in themselves and others keeps them in a state of caution and indecision. The surest way to manage uncertainty is to move forward and take action despite having a negative mindset. If the non-believer chooses to face their fears this can become their greatest salvation — a tipping point to a brighter possibility.

Dreamers have vision but it’s without action. They remain in wishing mode and don’t take action to realise their dreams. It’s only when they act and move from wishing to having that they start to transform both their personal and professional life. Those that remain as dreamers — wishful in their thinking and taking no action — can expect life to be the same in 12 months time as it is today. If you are currently a dreamer, let’s turn those dreams into a reality.

Workers always feel time poor and struggle for survival — to keep well, to maintain relationships and to pay the bills. With all of life’s demands they often put themselves at the bottom of the list, which causes increasing stress, not only for them but also on all those who are close. The worker gets things done, but struggles when they don’t have time to get the things done that really matter. And as life goes on, the pressure compounds and so do the consequences of working harder or longer hours.

Convincers look for agreement or recognition — trying to prove a particular point of view to themselves or to others. And while they are often successful in their convincing, they spend extra time and energy doing so, often creating stress for themselves and others. The convincer gathers evidence to put forward a case, and can come across as pushy with their constant need to get approval and acceptance. When the convincer stops looking for agreement from others and is first sold on themselves, they realise they have nothing to prove and everything to gain. And they create a new, more attractive energy — a tipping point where convincing is replaced with conviction.

It’s one thing to know what you believe, know what you value, know what’s important — but the believer uses trust to manage the constant stream of doubt that potentially weakens their vision. Believers are aware of their current reality and they use positive delusion to fuel belief until evidence of success shows up. Positive delusion helps them to feel it in advance, and protects their belief as they bridge the gap between where they are and where they want to be. It’s like playing a game of make-believe until success appears.

Energisers, with their strong belief, are determined to arrive at their destination. They have loads of conviction, are motivated and maintain enthusiasm. Energisers are full of vitality — driven by their passion for what they value. Some say that nothing great can be achieved without enthusiasm — it’s the key to attracting what you desire. In fact energisers can be difficult to resist as their energy becomes contagious. Infectious enthusiasm and conviction are the qualities that drive energisers to success! Energisers maintain their courage and conviction even when they get knocked down or rejected. They get back up quickly and continue taking action — determined to get the result they want.

True Believers
The True Believer uses the three superpowers of belief, conviction and commitment to reach fulfilment. And although this final step on the growth ladder may not necessarily be easy, the way to get there is simpler than you think. True Believers are loyal and dedicated to a cause they truly believe in. True Believers commit to finish, and as a result deliver on the promises they make to themselves. They attract other True Believers who live with the same sense of purpose and fulfilment. When these tribes form, the collective contribution creates a powerful increase in consciousness — turning cultures and communities around. If you have made it already, a huge congratulations — welcome to the Tribe!
Where are you on the ladder?

Now it’s time to start a new growth chapter in your life. Don’t settle or stagnate — there is always room for improvement. Don’t think, “I’m fine’ and make no changes.

Any pause, to see opportunity, is wasted without the action that’s required next.

Every Minute Counts and You Can Have It All! ®